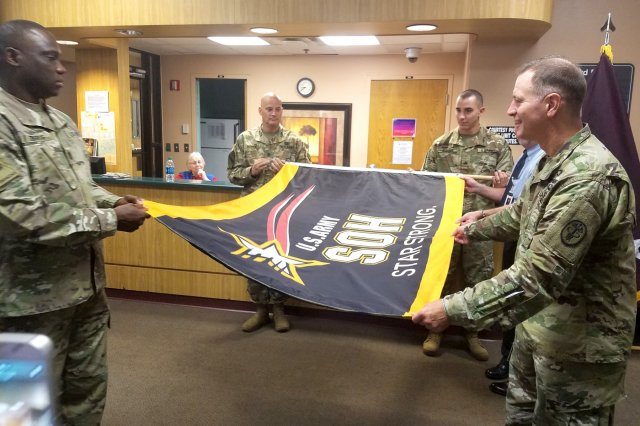 Shortly after, WBAMC rolled out ASMS to empower employees to take charge of safety in their area by self-identifying hazards; allowing staff to become a part of the hazard analysis process.

Organizations achieving the ASMS Star are recognized for the development, implementation and continuous improvement in the prevention and control of occupational safety and health hazards.

Because of the organization’s size, achieving a culture of safety was no easy task, said Henry Ford, safety manager, WBAMC. In order to engage more than 4,000 employees at 52 geographically-separated facilities, the WBAMC’s safety plan included implementing Additional Duty Safety Officers (ADSOs) as representatives for the safety office and to streamline safety concerns within the organization.

WBAMC’s safety philosophy also integrated every staff member into the role of safety officer. Not only did employees become responsible for safety in their workspaces, they underwent training to understand how to recognize, identify and react to unsafe work environments.

Strides toward star recognition also involved improved accessibility to filing safety concerns through the inclusion of a “safety button” on each computer desktop in the hospital while increasing transparency of previous safety reports in order to encourage best practices in resolving reoccurring conflicts.

The Rusty Star Award (literally a rusty star on rebar Ford mounted to a two-by-four) is one way the safety office has encouraged safety best practices, said Ford. The award is presented to the most active department submitting safety discrepancies or concerns through the MTF’s safety portal.

Not all occupations pose the same safety risks to the employee, said Ford. WBAMC has supply technicians who operate heavy machinery which face different risks than Medical Support Assistants who assist patients.