The procedure is a minimally-invasive alternative to open-heart surgery for patients with severe Aortic Stenosis (AS), a condition involving the narrowing of the heart’s aortic valve which minimizes or blocks blood delivered to the aorta resulting in limited blood flow throughout the body.

The TAVR procedure is revolutionary not only as an alternative to traditional means of treating AS but also as a solution for patients who may not have had an option two years ago.

Because blood flow is limited in patients with AS, it makes the heart work harder to pump blood through the body, resulting in symptoms such as chest pain, fatigue and difficulty breathing.

Similar to a stent placed in an artery, patients are implanted with self-expanding valves via a catheter usually entering the body through the femoral artery in the groin. The minimally-invasive procedure results in reduced operating and recovery time when compared to traditional open-heart surgery procedures which usually demand for a sternotomy (opening of the sternum) to treat AS.

According to McDonough, as new as the procedure is to medicine, there are two Food and Drug Administration-approved devices available to patients for the procedure: self-expanding and balloon-expanded valves. While both have similar functions, the WBAMC patients were implanted with the self-expanding to minimize risks.

“The valve is stented on a self-expanding metal that reacts to heat. When exposed to heat it expands to a predesigned form and the catheter slowly comes off the valve and expands,” said McDonough, a native of Port Jefferson, New York. “You don’t have to balloon expand or pace (regulate the heartbeat by means of an artificial pacemaker), (the valve) is recapturable and repositionable. The valve deploys to 80 percent first, allowing us to assess whether it’s position and functionality is correct before fully deploying.”

The self-expanding valve also conforms and seals to non-circular aortic valve annulus (passages) and may be safer to use than other TAVR devices due to decreased potential to rupture tissue, decreasing mortality risk.

For 75-year-old Daniel Mooneyhan, the second patient to be implanted with the valve in El Paso, the valve provided relief after suffering with AS for two years.

“I was walking one day and I had to stop and hold on to a tree at a park. I was having a lot of heaviness, a little chest pain here and there,” said Mooneyhan, a 75-year-old retired Army first sergeant.

After a series of tests and exams, Mooneyhan was informed that his aortic valve was failing. Due to previous ailments along with reluctance to open-heart surgery, Mooneyhan didn’t prove to be a good surgical candidate for a bioprosthetic valve, which must be sewn into place during open-heart surgery, occasionally taking hours to complete.

While this was a first at WBAMC, it wasn’t new to Mooneyhan, who had been researching treatment options for his condition.

“I watched hundreds of videos (regarding the procedure) and talked to the specialists,” said Mooneyhan. “They (perform the procedure) in Tucson, Albuquerque, Lubbock, Dallas, Indianapolis, San Antonio, so why can’t we do this here in El Paso?”

After McDonough spent three years supporting and training for the use of the TAVR device, the device was approved for treatment at WBAMC.

“It’s awesome,” said McDonough, who along with an interdisciplinary team of surgical professionals performed both treatments. “I felt very comfortable with our team doing this procedure and it’s very much a collaborated team approach. It’s not the technical part of deploying the valve, it’s the process.”

On Nov. 15, Mooneyhan received a call to be admitted for treatment at WBAMC the following day. Less than a week later, Mooneyhan was back home, feeling relieved.

“I’m sleeping better, I’m getting a full breath, I’m feeling good and have no scars or anything,” said Mooneyhan, just 10 days past the TAVR procedure. “There’s people here in this city, in this county who probably need this procedure, I think this is the future.”

“Once the valve is in and it’s functional, their heart is fixed,” said McDonough. “The only reason we keep the patient is to make sure they don’t develop conduction abnormalities (electrical impulses which cause the heart to beat), a potential need for a pacemaker and to monitor the access site.”

While WBAMC has already scheduled another pair of TAVR procedures, the success and benefit of the treatment made an emotional impact on Mooneyhan.

“There’s people out there who need this, who are dying,” said Mooneyhan. “To those guys that are retired and any veteran who needs this, they need to come (to WBAMC). These doctors are awesome, they’re good doctors.” 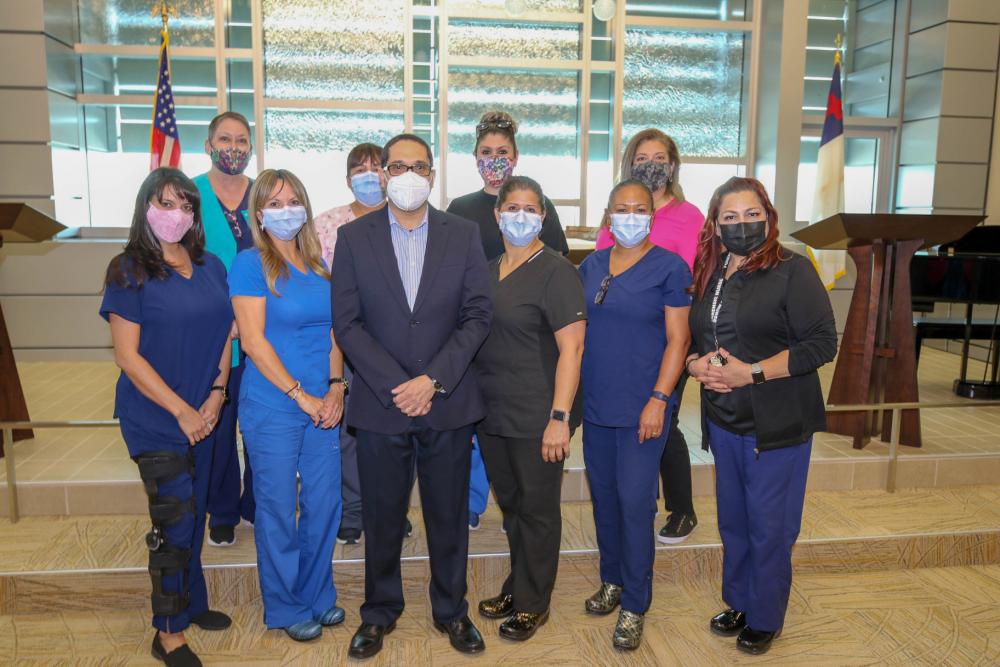