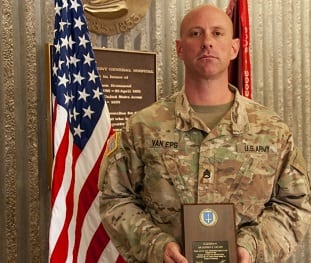 Marksmanship qualification courses are rare opportunities at Army Medical Centers where 24/7 operations essential to the health, and at times lives, of service members, their families and retirees, take top priority.

At William Beaumont Army Medical Center, a Military Treatment Facility which treats nearly 100,000 beneficiaries to include civilian traumas, a patient-filled schedule is an unacceptable excuse for disregarding Soldier duties.

To help Soldiers qualify on “the range,” one Soldier is increasing Soldier readiness at WBAMC through Primary Marksman Instruction (PMI), aimed at improving overall weapons proficiency and range scores in the Army’s Weapons Qualification Course.

“As soon as I showed up here (Troop Command, command sergeant major) tasked me (to provide marksmanship instruction),” said Staff Sgt. Stephen Van Eps, noncommissioned officer in charge, Urology Clinic, WBAMC. “He knows I’m a weapons guy, a gunsmith and he lives right by me.”

In his seven months assigned to the hospital, Van Eps has assisted in coaching dozens of Soldiers. Over his military career, Van Eps estimates he has coached over 100 qualification courses and oversaw at least 50 of them as the noncommissioned officer in charge.

The Master Marksmanship Training Course, a pilot program for marksmanship instructors in the Army, was recently launched. However, Van Eps, who hasn’t attended the course, credits his service as an infantryman in the Marine Corps for four years with launching his knack for shooting iron.

“To me (marksmanship instruction is simple), it’s just the standard,” said Van Eps, a graduate of the Marine Corps’ Primary Marksmanship Instructor (PMI) school, which develops marksmanship coaches to assist and instruct in small-arms fire. “I don’t do anything different, I just do what I do when it comes to any type of training.”

Recently, Van Eps was presented a token of appreciation from the German Air Force Air Defense School at Fort Bliss, Texas, for providing instruction on the M16 rifle and M9 pistol qualification courses to several German Air Force members, resulting in all 10 shooters placing in the sharpshooter or expert levels on the M16 and 70 percent of shooters qualifying with the M9 pistol.

“(Being recognized) was a huge honor, I was shocked to hear about it,” said Van Eps, a native of Morris, Minnesota. “There’s not that many opportunities for them to qualify on these weapons, so we taught one on one and small group instruction helping them identify deficiencies.”

While Van Eps, who holds an associate of science in firearm technology, has brought a wealth of marksmanship knowledge to WBAMC Soldiers, he credits other Soldiers for the increase in proficiency.

“I started recruiting within the hospital for coaches immediately after the first range,” said Van Eps. “I assessed who knew what they were doing, how they were shooting, and put together a comprehensive training plan to build safety and coaching mentalities in these coaches.”

According to Van Eps, a combat veteran with multiple deployments as a flight paramedic, marksmanship training at Military Treatment Facilities (MTFs) is unique because of the emphasis on patient care. While some Soldiers are assigned to front-line units throughout their careers, others may not be afforded the opportunity, possibly compromising basic Soldier skills, such as marksmanship.

“If you don’t have (marksmanship) knowledge like this (qualifying) becomes complex,” said Van Eps. “(Noncommissioned officers at WBAMC) are trying to develop those skills in young Soldiers, across the board, not only in marksmanship. We’ve seen results the last few ranges with more than 95 percent qualifying, something unheard of in the medical community.”

A husband and father of three, the firearm enthusiast has extended his training to family members and enjoys watching them progress with different weapons systems.

“I’m an avid hunters, and have gone through several types of weapons courses,” said Van Eps.

Van Eps has qualified on weapons courses as an expert multiple times and hopes to one day qualify for the President’s Hundred Tab, a badge awarded to the top 100 civilian and military shooters in prestigious shooting competitions.