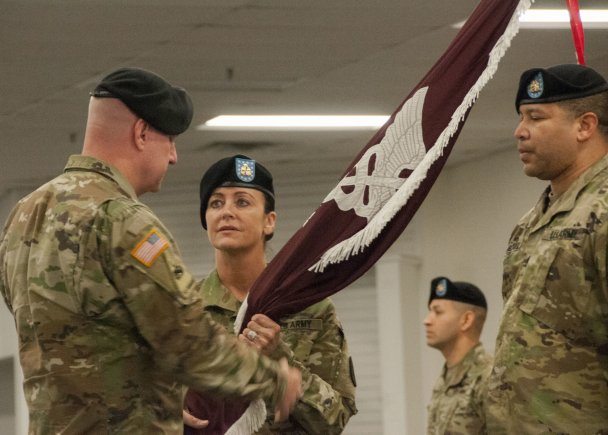 A unit’s command sergeant major is the top enlisted advisor to the commander and an advocate for enlisted Soldiers.

During the ceremony Rude performed the traditional passing of the unit colors to Ray, a symbolism of assumption of responsibility and authority of the incoming command sergeant major.

“I’m truly humbled and honored to serve as the command sergeant major for the Soldiers, civilians and families of WBAMC,” said Ray. “Over the past 25 years I’ve been fortunate enough to serve with some great outstanding leaders and soldiers. I’m forever grateful and appreciative for their mentorship and guidance because it’s them who prepared me to take on the responsibility of what I perceive as the most challenging but rewarding job in my entire career at this point.”

According to Rude, while Ray’s peers discussed her strengths and knowledge with medical operations, both in and out of Military Treatment Facilities, their biggest emphasis was her love and caring for Soldiers.

“The success of this organization lies with each and every one of you doing your part as a member of an outstanding winning team,” said Ray. “Continue striving to be better tomorrow than you are today, so we can take our organization to the next level.”

“(Fetzer is) outstanding,” said Ray. “I’ve always appreciated his candid leadership and guidance. Because of his leadership, WBAMC is better today.”

WBAMC is dedicated to increasing Army Readiness through patient-friendly access to high-quality healthcare.

“We’ll continue to guide this extraordinary organization into the future of Army Medicine,” said Ray.

The ceremony was held at the Fort Bliss and Old Ironsides Museum, on Fort Bliss, December 19, 2017.