On July 12, Texas House Democrats packed their bags and headed for the nation’s capital in a high-profile effort to block passage of GOP-backed voting restrictions.

Democrats hoped their exodus would break what’s called a quorum — the minimum number of lawmakers needed to conduct business — so Republicans couldn’t pass legislation that could ban drive-thru and 24-hour voting, among other sweeping restrictions.

The move quickly garnered condemnation from Republican officials, who vowed to do what they could to compel Democrats back to Austin. Democrats, meanwhile, hoped to leverage the national attention and advocate for a pair of federal voting bills.

Simply put, a quorum is the minimum number of members required for a governing body to conduct official business. In the Texas Legislature, two-thirds of the elected members constitute a quorum in each chamber.

With at least 51 out of 67 House Democrats absent, there will not be enough members present to conduct business as usual under House rules.

The House rules state that without a quorum, “no business shall be transacted, except to compel the attendance of absent members or to adjourn.”

After landing in Washington, D.C., Democratic lawmakers made it clear that they would stay there until August 6 — when the special session is set to expire. Their departure not only impedes the voting restrictions legislation, but also the ten other conservative priority items Gov. Greg Abbott slated for the special session, such as legislation on abortion, critical race theory and transgender student athletes.

The Texas Senate still plans to proceed with business as usual, despite the fact that it’s also dealt with its handful of no-shows as well. Nine Democratic state senators were missing from the Senate floor July 13, meaning the Senate barely met quorum.

Three senators confirmed with the Texas Tribune that they’ve also headed for D.C. in solidarity with their House counterparts. They are Sens. Sarah Eckhardt of Austin and Royce West and Nathan Johnson of Dallas.

The Senate moved forward with approving its version of voting restrictions legislation — Senate Bill 1 — on July 13, one day after House Democrats fled Austin. But as long as the House lacks enough members to vote on legislation, no bill can become law.

House Speaker Dade Phelan, R-Beaumont, made it clear that the chamber will “use every available resource” to preserve the quorum. One way House Republicans went about this is by passing a procedural move known as “the call of the House,” which allows for law enforcement to track down lawmakers who have already fled the chamber.

Rep. Will Metcalf, R-Conroe, moved to issue “the call of the House” July 13, which passed 76-4. He was met with opposition from a small handful of Democrats who chose to remain on the House Floor. They were: Reps. Ryan Guillen of Rio Grande City, Tracy King of Batesville, Eddie Morales Jr. of Eagle Pass and John Turner of Dallas.

It is still unclear how that will work considering the fact that Texas law enforcement does not have any sort of jurisdiction in D.C. The provision is not really relevant until Democrats return to the “corporate boundaries of the state,” according to Randall Erben, an adjunct professor at the University of Texas at Austin School of Law.

Gov. Greg Abbott has also vowed to go as far as arresting the Democratic lawmakers and calling as many special sessions as necessary.

“As soon as they come back in the state of Texas, they will be arrested, they will be cabined inside the Texas Capitol until they get their job done,” he told KVUE in an interview July 12.

Randall Erben, an adjunct professor at the University of Texas at Austin School of Law, said he couldn’t find anything that would give the governor the authority to arrest members. Instead, Erben said, “the House has their own procedures and that is really the relevant provision in my opinion,” pointing to Rule 5 Section 8 of the House Rules.

Erben said while some people “may argue” members could be violating state laws on resisting or evading arrest, he doesn’t believe House members would face arrest on criminal charges. He said they would likely face being “detained and returned to the Capitol” so the House could achieve a quorum.

“It’s not like being arrested for robbing a bank or something,” Erben said. “It’s essentially securing their presence back in the House so the House can conduct business.”

Senate Bill 1 and House Bill 3 seek to tighten Texas’ voting laws and include bans on drive-thru and 24-hour voting.

Additionally, the bills would require voters to provide their driver’s license number or the last four digits of their Social Security number on applications for mail-in and returned ballots.

SB 1 deviates from its House counterpart by requiring monthly reviews of the state’s voter rolls to identify noncitizens.

Both bills also grant partisan poll watchers “free movement” within polling places, with the exception of being present at the voting station while the voter is filling out their ballot. The legislation would also make it a criminal offense if the voter distances themself from the watcher or obstructs their view “in a manner that would make observation not reasonably effective.”

Democrats headed to Washington, D.C., in hopes of drawing more national attention to their opposition to the Texas legislation. Their fight at home coincides with the battle for sweeping federal voting rights legislation.

After this year’s regular legislative session, a delegation of Democratic state representatives and senators traveled to D.C. to advocate for a pair of federal bills. The first would preempt significant portions of the Texas bills and set new federal standards for elections like same-day and automatic voter registration. The second would restore sweeping safeguards for voters of color by reinstating federal oversight of elections in states like Texas with troubling records of discriminating against voters of color.

“Just as President Biden said today, we can’t afford to wait. Right now, Republicans in Texas and around the country are hellbent on slashing our voting rights — because they know that the only way they can cling to power is by stopping us from voting,” Texas Democratic Party Chair Gilberto Hinojosa said in a statement July 13.

Yes. Back in May, Democrats broke quorum over a version of voting restrictions legislation by walking out of the State Capitol during the final hours of this year’s regular legislative session, much to the dismay of Gov. Greg Abbott.

But the last time state lawmakers attempted to cross state lines to break quorum was nearly two decades ago — in 2003. Democrats left for Oklahoma in order to block a Republican-drawn redistricting plan.

Then-Gov. Rick Perry called a special session, prompting Democrats to flee again, this time to New Mexico. They eventually came back, thus allowing for the redistricting bill to pass.

“As they fly across the country on cushy private planes, they leave undone issues that can help their districts and our state,” Abbott said in a statement July 12. “The Democrats must put aside partisan political games and get back to the job they were elected to do.”

In a press conference in Detroit on July 12, Democratic Vice President Kamala Harris commended Texas House Democrats and said their decision to leave Texas was a display of “extraordinary courage and commitment.”

“I will say that they are leaders who are marching in the path that so many others before did when they fought and many died for our right to vote,” Harris said. 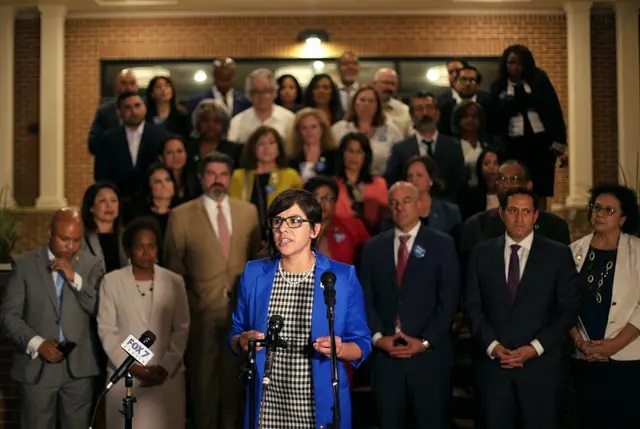