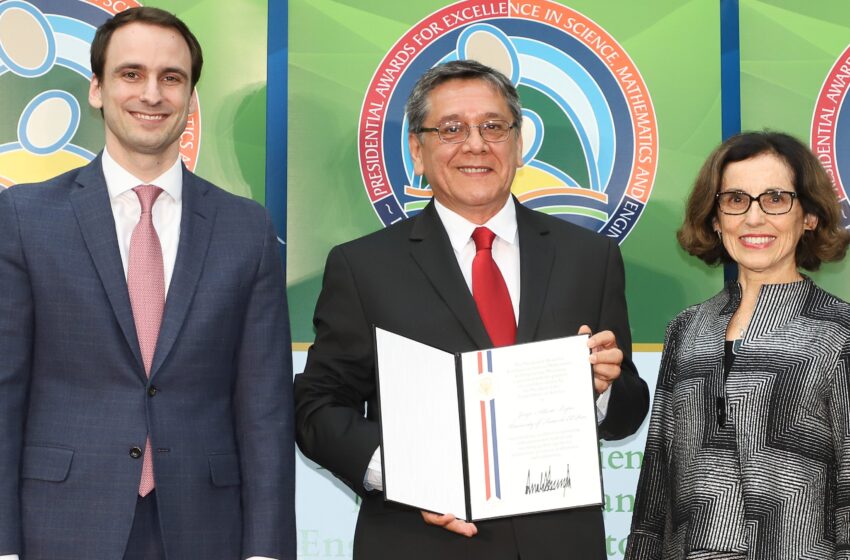 Jorge A. Lopez, Ph.D., enters his 29th year as a physics professor at The University of Texas at El Paso with no intention of changing the way he runs his classroom.

But there is definitely something unique about the method in which Lopez carries out instruction, something of which the nation’s highest executive office has taken notice.

The Schumaker Professor in UTEP’s Department of Physics enters the 2018-19 academic year newly minted as a recipient of the Presidential Award for Excellence in Science, Mathematics and Engineering Mentoring (PAESMEM), the highest national mentoring award bestowed by the White House.

Lopez received the prize along with 38 other winners during a ceremony at the Smithsonian National Portrait Gallery in Washington, D.C. this summer. The awards, issued by the White House Office of Science and Technology Policy (OSTP), with the National Science Foundation (NSF), recognizes outstanding efforts of mentors who encourage the next generation of innovators and help develop a science and engineering workforce that reflects America’s diverse talent.

“Of course, I am honored to have received this award,” Lopez said. “It is an extremely prestigious honor. It opens the doors to more grants and to participate in more mentoring projects.”

While it is undoubtedly an honor to be listed among some of the most pre-eminent teaching names from some of the country’s most highly regarded institutions, Lopez said the biggest beneficiaries of the award are his students.

“UTEP President Diana Natalicio has worked long and hard to build our University into a recognized research institution,” Lopez said. “Students have heard that. But when they come here, they want to feel it. When they know that they are sitting in a classroom with a professor that has been honored by The White House, they see a difference in the teaching. They pay attention. They really think, ‘Hey, I’m getting something special.’”

Robert Kirken, Ph.D., dean of the College of Science, said Lopez epitomizes the type of mentor all teachers should strive to become.

“Jorge Lopez stands as a model for what a faculty member should aspire to be,” Kirken said. “He cares intensely about his students, investing his time in their academic growth and career development through a level of self-sacrifice that is genuine and determined. He is utterly devoted to the success of his students, of the College of Science and UTEP as a whole.”

Lopez arrived at UTEP in 1990 after earning a Ph.D. in nuclear physics at Texas A&M University, spending four years as a postdoctoral researcher in Copenhagen, Denmark, and Berkeley, California, and a one-year stint at Cal Poly San Luis Obispo. The Juárez, Mexico, native — and UTEP graduate (B.S., 1977, M.S., 1979) — returned to El Paso to be closer to family. But he also sought something else.

“I wanted to make a difference,” Lopez said.

Lopez arrived two years after President Natalicio took office. Since then, he has accepted and adhered to her access and excellence mission for residents of both sides of the U.S.-Mexico border.

And Lopez has provided guidance. He has taught scores of undergraduates and has seen 38 master’s students graduate. He has also directed thesis work as an adjunct professor for two doctoral students. Lopez said he has seen many of his students move on to jobs in industry in addition to roles as professors and researchers throughout the world. One of those students is Jorge A. Muñoz, Ph.D.

Muñoz received his B.S. in physics and applied mathematics from UTEP in 2007. He followed that with his doctorate in materials science from the California Institute of Technology in 2013. He was spurred to major in physics after listening to Lopez deliver an address to high school students in 2002 explaining the windy weather that descends on El Paso every spring.

“He mentioned that many people attribute the local phenomenon to superstitious events,” Muñoz said. “But he showed it could be much better explained by meteorology. This was the first time I ever talked to a physicist. His sense of humor and approachability collided with the idea that I had of physicists derived from pop culture. I considered seriously for the first time the possibility of pursuing a scientific career.”

Muñoz began working at Intel shortly after graduating from Caltech in 2013. But all along, he felt a constant pull, a calling to return to the place where his journey began. It reaches fruition this fall as Muñoz will begin work as an assistant professor in UTEP’s Department of Physics, where he ultimately hopes to establish a research program that intertwines machine learning and materials physics.

“I am looking forward to collaborating with him again at UTEP in recruitment and retention efforts,” Muñoz said of working alongside his mentor. “We will work on providing the talented and motivated students of the region the guidance and opportunities that will allow them to reach their goals and serve as an engine of social mobility.”

For Lopez, his former student’s journey is one of many success stories he has been able to help cultivate. He said he also is grateful his efforts have netted various awards and recognitions throughout the years, to include his recent PAESMEM award. But even if he had never received a single accolade, Lopez would not have wavered in his steadfast support of students.

“I always say that the best thing I have done in my life is be a mentor,” Lopez said. “I have written books, I have won awards, I have done notable things through my area of research. But through all of that, the world remains the same. From what I see, where I have made a difference is with students, students who go on to do great things in so many places. That, for me, is my main contribution to the world.”