When El Pasoans mark the one-year anniversary of the Walmart shooting Monday, attorney Yvonne Rosales will be one of hundreds of thousands of border residents reflecting on the tragedy afflicted on this city that claimed the lives of 23 people.

But after the candlelight vigils dim, Rosales will be right back at the task she’s been preparing for since she was confirmed as the county’s incoming district attorney — how to take over an office that could prosecute the man authorities say is responsible for one of the worst mass shootings in Texas history.

Rosales, an El Paso native who graduated from Austin High School and the University of Texas El Paso, will replace Jaime Esparza — who decided not to seek reelection after nearly three decades in office — in January to become the county’s first female district attorney.

Rosales is inheriting one of the biggest criminal cases in the state’s history amid a pandemic that’s shut down in-person court proceedings. She’s also inheriting a huge decision: whether to pursue a death penalty prosecution in the city’s biggest murder case.

Federal prosecutors have also brought a litany of charges against Patrick Crusius, a 22-year-old from the Dallas suburb of Allen who authorities claim drove nearly 600 miles to target Hispanics; he allegedly posted a document online just before the shooting railing against immigrants and a “Hispanic invasion of Texas.” He’s facing dozens of state and federal charges, including nearly two dozen counts of capital murder at the state level and 23 counts of hate crimes resulting in death and 23 involving an attempt to kill at the federal level.

Esparza, the outgoing district attorney, said he would pursue the death penalty, while federal prosecutors have stated they would consider it upon conviction, but it’s unclear which case will proceed first — and whether Crusius will be tried by both jurisdictions. Rosales said justice isn’t likely to come soon because of the complexity of the case and the uncertainty of the coronavirus pandemic.

“I really don’t anticipate this case going to the trial [phase] until, I am guessing, between two to three years,” she said.

Before the coronavirus pandemic put a stranglehold on local economies, including El Paso’s, Esparza said he was “offended” at the suggestion that the county should sit back and let federal officials take the lead in Crusius’ prosecution in order to save the county millions in prosecution costs.

“Funding should never have a barrier in this prosecution, so I can tell you I’m not going to hand it off to the feds just because it’s cheaper,” Esparza said in February.

That was before the pandemic ravaged El Paso County and the rest of Texas. After sealing her victory in last month’s runoff election, Rosales said letting the U.S. attorney’s office prosecute Crusius first would make financial sense for El Paso.

“From a legal perspective, it would make more sense for the federal government to try the case first,” she said, adding that the appeals process for federal cases is faster than state cases.

“If you’re going to talk economics, then it would save the county of El Paso millions of dollars to try that case,” Rosales added. She said it’s too soon to make that determination, and she plans to discuss the situation with both the state and federal judges after she takes office.

Rosales said she must also consider whether the community — and especially the victims’ families — should be forced to relive the tragedy twice during two separate trials.

“As we approach the one year anniversary, it’s going to be a very emotional time for these people,” she said. “Is it something that we really want to put the families through a second time?”

Crusius’ attorneys have already raised the issue of his mental health and said he has “lifelong neurological and mental disabilities,” the Associated Press reported earlier this month. His lawyers said that should be taken into consideration when prosecutors consider what punishment they seek.

Despite confessing to authorities that he was the gunman after his arrest the day of the shooting, Crusius has pleaded not guilty in both the state and federal cases. Federal prosecutors were scheduled to meet Thursday to discuss what punishment they would seek when the case moves forward. Defense attorney David Lane did not respond to a request for comment.

In a emailed statement, John Bash, the U.S attorney for the Western District of Texas, said: “I join all El Pasoans, all Texans, and all Americans in mourning those we lost that terrible day one year ago. And I pray for the continued healing of those who survived. My office will not relent in our pursuit of justice for the victims and our community.” Bash declined to comment on any aspect of the prosecution.

Robert Dunham, executive director of the Washington-based Death Penalty Information Center, a nonprofit think tank that analyzes the death penalty, said the case could be over quickly if prosecutors took the death penalty off the table.

Earlier this month in the parking lot of the Walmart, where the shooting began before the gunman entered the store, El Pasoans had a range of thoughts on what the accused gunman’s fate should be.

“I don’t think anyone should get the death penalty,” said Stephanie Cordova. “He needs to live so he can learn his lesson. What if he just wants to die?”

Her friend Joey Reynolds said that while he’d usually agree with Cordova, the scale of the shooting and the number of lives lost justifies capital punishment.

“My personal belief, I think he should [face the death penalty],” he said. “A lot of [images] were shown online and I think that got to a lot of the younger generation. It would be nice to have some finalization.”

Domingo Soledad Nuñez, who was raised in Chihuahua City in northern Mexico but has lived in El Paso for 20 years, said whether Crusius is executed or not won’t make a difference in God’s eyes.

“I can’t say whether to kill him or lock him up for the rest of the life,” he added. “But he was already dead inside when he did what he did.”

The anniversary has already rekindled demands for action from lawmakers, especially Democrats who last year pleaded with Gov. Greg Abbott to call a special session of the Texas Legislature to address gun violence. Those calls grew louder after another mass shooting just weeks later in Midland that took eight lives, including the shooter’s.

The El Paso shooting happened a day after Abbott’s campaign sent out a mailer saying Texans would need to take matters into their “own hands” to “defend” the border.

Abbott later said he spoke to members of El Paso’s legislative delegation and told them “that mistakes were made and course correction has been made,” he said at the time. “We will make sure that we work collaboratively in unification.”

The governor didn’t call lawmakers back into session, instead opting for roundtable discussions in El Paso on gun violence.

During a press call Monday with Moms Demand Action, a national gun reform group with chapters across the country, U.S. Rep Veronica Escobar, D-El Paso, said Texas Republicans who pushed for a special session on a transgender bathroom bill showed little interest in addressing what she called the more pressing issue of gun violence.

“Unfortunately we have yet to see any legislation taken up and really not much has changed,” she said. “And as you can imagine, it is very frustrating not just for me, but I hear all the time from constituents ‘What are you going to do about this?’”

State Rep. Joe Moody, D-El Paso, said the state’s Democratic caucus has had a long-standing request for a special session on gun violence since before the Walmart shooting. But he said he did come away with the feeling that the task forces formed after the shooting were able to create some momentum on how to move forward next session and address issues like strengthening background checks and ensuring that information provided to gun sellers by potential owners is accurate.

“The message I heard from the governor and from others was to build consensus around reform measures and then bring those forward,” he said. “I fully expect and anticipate that when we return, in whatever way it looks in January, that gun violence and community safety is going to be one of the major issues that is going to get tackled.”

Wittman said Thursday that the governor shares the city’s grief and said lawmakers will act on other recommendations by the task force when lawmakers return to the Capitol next year.

“Our hearts forever remain with the victims, their families, and all those impacted by this senseless and hateful attack,” he said in an email. “As Texas prepares for the upcoming session, we seek justice for all those harmed in this tragedy by passing laws to combat domestic terrorism in Texas.”

The city and county have planned events to commemorate the anniversary, including a drive-through candlelight vigil and a memorial at the city’s history museum. Activist groups said they are also planning their own events. Fernando Garcia, the executive director of the El Paso-based Border Network for Human Rights, said his group will march to the Walmart from a nearby memorial service carrying 23 white crosses.

“What is different from what we’re doing and from the county and the city is doing is we’re going to call it what it was, white supremacy,” he said. “It was a racist attack against our community. It wasn’t about mental health or about a disturbed individual. It was created by the hateful rhetoric by the president and others.”

Disclosure: Walmart has been a financial supporter of The Texas Tribune, a nonprofit, nonpartisan news organization that is funded in part by donations from members, foundations and corporate sponsors. Financial supporters play no role in the Tribune’s journalism. Find a complete list of them here. 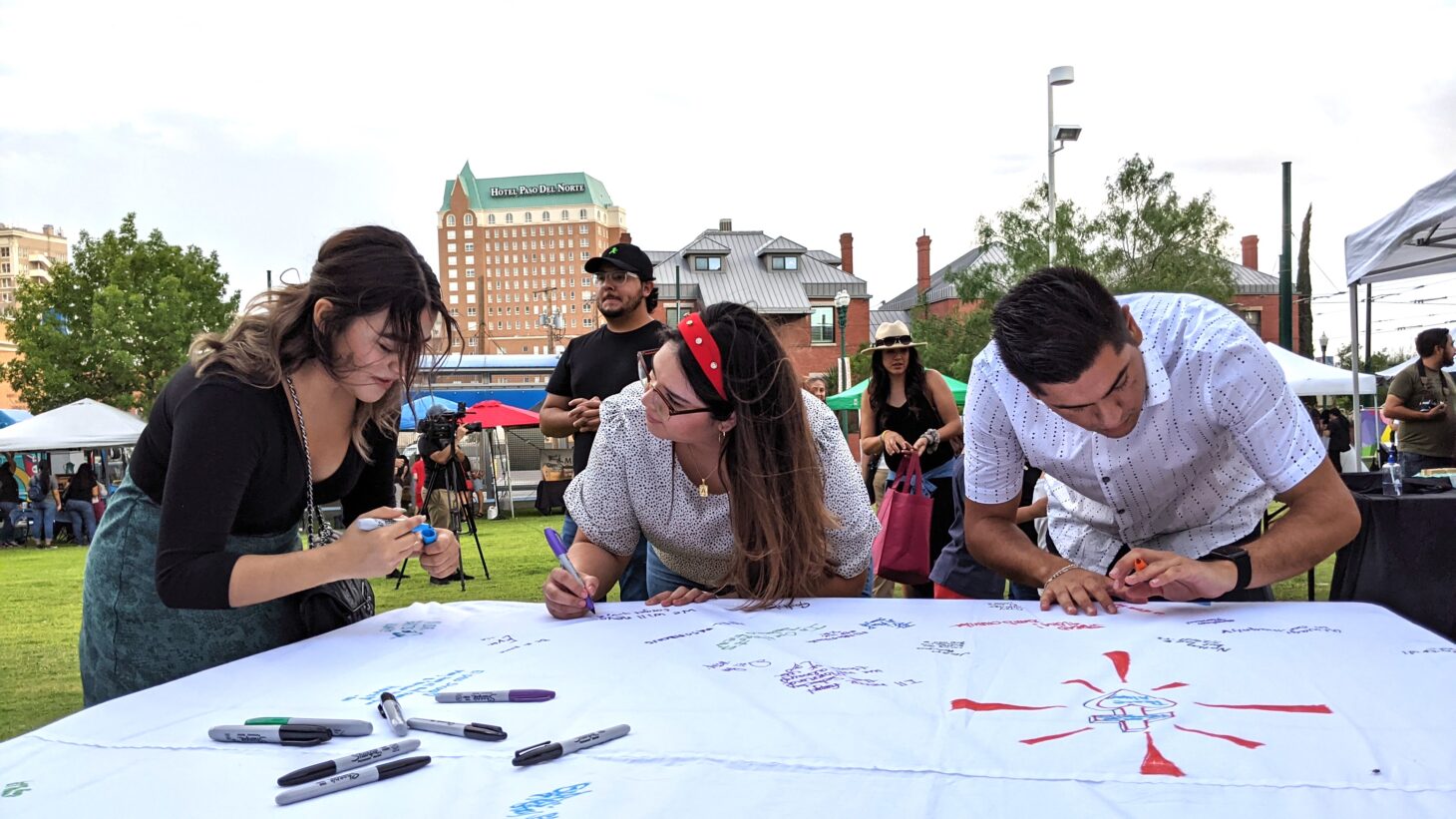