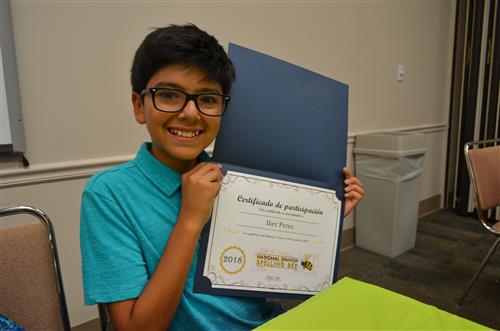 The Wiggs Wolverine represented his school, the El Paso Independent School District and El Paso a whole in the Concurso Nacional de Deletreo en Español, or the National Spanish Spelling Bee. The event was began last Thursday and ended on Sunday in San Antonio.

Pérez, who earned his spot among the nation’s top Spanish spellers by winning the competitive EPISD Spanish Spelling Bee in March, made it through the first rounds of the spelling bee before bowing out.

“He did an excellent job, as the competition was extremely challenging,” district coordinator Guadalupe Pineda said.

Pérez last word got the best of him. He was unable to correctly spell lengüeta, which means shoe tongue in Spanish.

However, Pérez left the competition proud of his participation and ready to commit to another year of Spanish spelling bee. School officials said Pérez already is practicing for a return trip to nationals.

Pérez was not alone in the trip. His parents, his older brother and Wiggs teacher Jerusha Hunt traveled to San Antonio to support him. They all wore custom made orange-and-blue jerseys donning the EPISD seal and a special Wiggs Spanish Spelling Bee logo.

Nearly 50 contestants from 11 states participate at the national level. This is the eighth year that the Spanish spelling bee is organized.