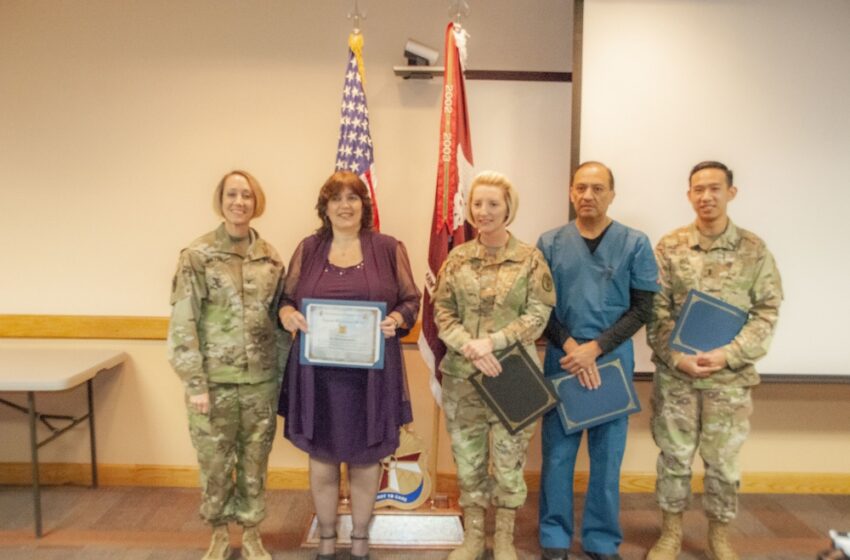 It’s been one year since the first Light the Way Award was presented to a pair of nurses at William Beaumont Army Medical Center.

Since then, dozens of nominations have been submitted detailing compassionate and heroic tales of nursing encounters by many who appreciate nurses, from physicians to patients.

The award is designed to recognize a broader range of nurses at WBAMC, to include Registered Nurses, Licensed Vocational Nurses, nursing assistants/ aids, medics and technicians.

On November 15, two active-duty Soldiers joined the ranks of Light the Way Award recipients, solidifying the impact nurses have made for Soldiers, families and other beneficiaries across the WBAMC footprint.

“Growing up I lived in a house with a nurse (mother) and I told myself that I would never be a nurse,” said 1st Lt. Christina Chipman, staff nurse, Medical telemetry ward, WBAMC. “It wasn’t something I ever really desired to do, but when I was in college I was in school for human biology and realized I wanted to do something more practical where I could be at bedside with a patient and graduated with a nursing degree. I haven’t looked back since.”

In 2017, Chipman made a large difference in one Soldier’s recovery during his healing process from suffering multiple small-arms fire injuries in Afghanistan while in support of Operation Freedom’s Sentinel. According to the Soldier, in a time of confusion and fear, Chipman took it upon herself to ease family members and explain every medical procedure in detail. Although multiple nurses attended the Soldier during his care at WBAMC, Chipman’s compassion and care stood out.

The second Soldier nominated was Maj. Lena Fabian, certified nurse midwife, Department of Women’s Health, WBAMC. According to Fabian’s nomination, she went above and beyond by helping the Labor and Delivery Section after being done with scheduled work. Fabian’s selflessness made even more of an impact as the section had an influx of patient admissions and was short-staffed.

“(Nursing) is about gaining trust and providing the quality care the patient requires at that time,” said Fabian, a native of Painesville, Ohio. “I work in (obstetrics) so a lot of times there are happy situations. Times when families are expecting their first, second or third child.”

While only two nurses are recognized each quarter, all nominees are credited for their contributions toward providing high-quality patient care. The award is in honor of Florence Nightingale’s use of a lantern to check on patients throughout the night, dubbing her “The Lady with the Lamp.”

“Nursing to me means providing quality, compassionate care to patients in their time of need, that they may not show you they need that care but it’s something that can change a negative situation into a positive one,” said Fabian, who plans to continue a career in medicine until retirement. “I had one incident when a patient came in bleeding early in her pregnancy and subsequently lost the baby. The patient showed up at my clinic again, and it worried me because I knew what had happened before, the outcome. They wanted to see me and remembered me so I made it a point to come into her delivery because we had bonded through previous experiences and also at her request.”

“Being a nurse is definitely something that is who you are as a person, part of your identity, not something you could ever leave behind,” said Chipman, a native of Plymouth, Indiana. “I do have a lot of patients coming back a lot (for treatment), and it makes them feel comfortable to have a nurse who knows their history, knows how they like to be cared for, because being in a hospital is such a scary time.”

Chipman, who was commissioned two years ago, plans to continue a career in medicine with her eyes set on Pediatric oncology.

To receive the award, nurses are judged on six elements: Love of profession and patient, Inspiration (inspiring others through action), Going above and beyond, Heart (demonstrating compassion and empathy), Teamwork and Selflessness. Together, the elements form the acronym LIGHTS.

To nominate a nurse, patients, physicians and other staff members can submit nominations forms found throughout the hospital and through the WBAMC website.