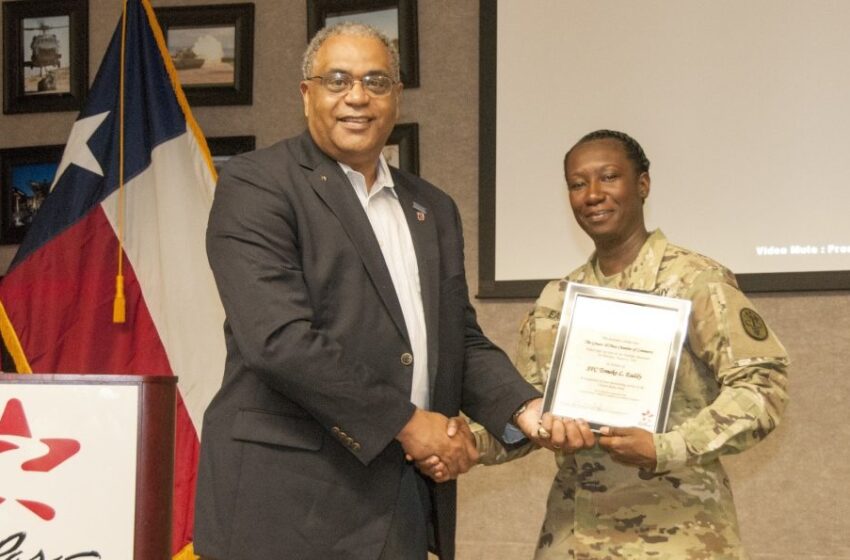 Sgt. 1st Class Tomeko Eaddy, noncommissioned officer in charge, Department of Physical Medicine and Rehabilitation, WBAMC, was recognized as the GEPCC Soldier of the Month for August 2016. Eaddy, a native of Florence, South Carolina, enlisted in the Army as a combat medic in 1998.

“We have so many Soldier-citizens that do so many good things,” said Lt. Col. Steven Knapp, commander, Troop Command, WBAMC. “Eaddy is the cream of the crop.”

Although Eaddy has been in the El Paso community for only two years, during that time she has contributed countless hours to schools and community organizations in addition to fundraising over $2,000 worth of items for El Paso’s homeless.

According to Knapp, Eaddy is the kind of Soldier for others to emulate which is evident in the 75 military and civilian employees she manages.

“She’s somebody that people look up to,” said Knapp. “There are a lot of other people in her shadow who do good things.”

As a token of appreciation for Eaddy’s community involvement, El Paso’s “Star on the Mountain” a 459-foot by 278-foot star that illuminates on the side of the Franklin Mountains, which can be seen for miles from the East, was lit in her name on Aug. 4.

“It’s very humbling,” said Eaddy. “Anything I do it’s only because I feel that’s what is right.”

In addition to her volunteer work and fundraising, Eaddy is also a member of the Sgt. Audie Murphy Club, comprised of elite noncommissioned officers committed to leading from the front. Eaddy is also active in the Partners In Education (PIE) Program, which partners local schools with Army units to improve the quality of education through Soldier involvement while providing role models for students.

“I’m never a person that wants to be out in front getting the attention. I do it because I want someone else to feel the effects,” said Eaddy. “It’s good to know that people do see what you’re doing and they appreciate it, even if you don’t get recognized someone sees it and someone at least says ‘Thank you’.”