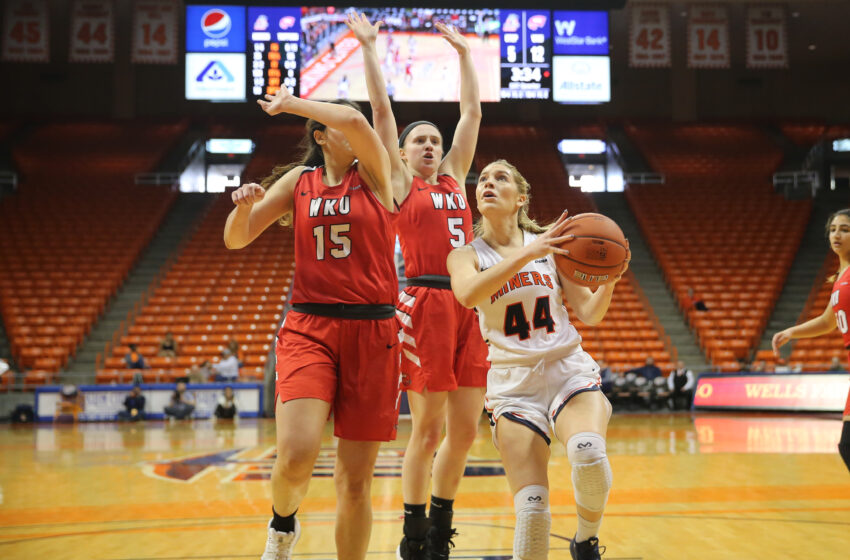 “One of the coolest things about this team is that they’ve had every excuse to lay down and not play well, but they seem to be doing the opposite,” UTEP head coach Kevin Baker said. “What an impressive group of young ladies to be around. I want a win for these guys. I’m super proud of them. We made some big mistakes (late). We’re kind of an unlucky team right now.”

Another factor was UTEP’s 23 turnovers, which led to 25 points by the visitors. It was a wild game with big runs from both sides, in addition to seven ties and eight lead changes.

After wrapping a 27-5 run around the quarter break to erase a game-opening 12-2 surge by WKU, UTEP looked to be in good shape in spite of only dressing seven players for the third straight contest. The Miners were up by six (36-30) at the half, and still led by five with three minutes remaining in regulation.

WKU went to work at the charity stripe while getting a couple of stops to inch within two (59-57), but Alexis Brewer’s go-ahead 3-pointer with 44 seconds left spun out. Zec got the board only to pressured and have Givens come away with the steal.

Givens was fouled and she hit the first free throw to make it 59-58. She missed the second but somehow got her own rebound before being fouled again. This time she hit both, putting the visitors ahead (60-59) with 36 seconds to play.

UTEP didn’t flinch, getting a basket on a driving lay-up from Ariona Gill with 15 seconds left to regain the lead (61-60). The visitors called timeout to advance the ball, and Elgedawy got loose inside for the jumper to put her side back up by one (62-61) with 10 seconds left.

The Miners were out of timeouts and unfortunately a pass from Ariana Taylor sailed out of bounds with five seconds remaining. UTEP fouled Givens, who made both free throws. The Miners heaved it deep and connected with Jade Rochelle, but her desperation 3-pointer to tie it from the top of the arch fell short as WKU escaped. It marked the second straight home loss by three points for the Miners.

Taylor supported Zec and Puc with nine points on a perfect shooting day (3-3 FG, 1-1 3PT, 2-2 FT) while Jordan Alexander added six points and five boards. UTEP was nearly flawless at the charity stripe (16-19) and actually outscored the WKU bench (6-2) despite having only two reserves available.

The Lady Toppers were held to 39.7 percent (23-58), in large part to finishing just 3-23 (13.0 percent) on 3-point attempts. Whitney Creech pitched in six points and six assists to buoy Elgedawy and Givens, but no one else on the squad had more than three points.

WKU scored the first six points of the game on the way to leading by 10 (12-2) with 4:56 to play in the first quarter. UTEP would not wilt away, but instead regrouped and stuck back in a big way. The Miners tallied the final 10 points of the frame to pull even (12-12) through 10 minutes. It was quite a feat, considering UTEP had eight of its eventual 23 giveaways in the frame.

After the two sides traded baskets over the first couple of minutes of the second quarter, the Lady Toppers held a slim 17-16 advantage. UTEP kicked it into high gear, peeling off 12 straight points to lead by 12 (29-17) with 3:45 to play in the half. Zec and Puc combined for 10 of the 12 points in the stretch.

WKU countered with five in a row but a Zec jumper halted it. It was back and forth over the final couple of minutes, allowing the Miners to lead by six (36-30) heading into halftime. The margin was still six (47-41) through three quarters before the Lady Toppers pulled off the rally by outscoring the Orange and Blue by nine (23-14) in the final frame.

UTEP will head to the Eastern Time Zone for the second time in three weeks when it plays at Florida Atlantic at 5 p.m. MT/7 p.m. ET on Feb. 7.

The Miners will conclude their stay in the “Sunshine State” when they lock up with FIU at 12 p.m. MT/2 p.m. ET on Feb. 9. Brandon Cohn will have the call for both on 600 ESPN El Paso.