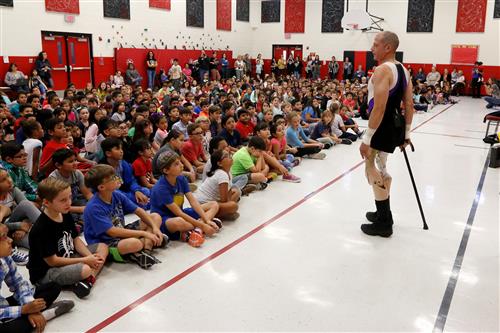 A 1996 Paralympic athlete transformed the Polk Elementary gym into a full-fledged Olympic arena, inspiring students to follow their own dreams in the process.

Earlier this week, former Paralympian Lloyd Bachrach, who played for the U.S. men’s volleyball team during the Atlanta Paralympic Games, spoke to students at Polk and Mesita elementary schools to share his story of perseverance and goal-setting. The presentations were organized by each campus’ PTA.

“We went to one of his presentations and we really liked what he had to say,” Polk PTA president Alejandra Ramirez said. “In the world we are living in it’s very important for the kids to know that they can overcome anything if they believe in themselves and work hard.”

Bachrach touched on the five key components of his “Yes You Can” message, that focuses on building self-esteem, having a positive attitude, setting goals, perseverance and taking care of your health.

“The only limitations that you and I have as people are the limitations we place on ourselves. You have the ability to be anything you choose, as long as you want it badly enough,” he told the students. “I believe in you. Your teachers and parents believe in you. When you believe in you, you are going to live your dreams, like I’m living mine.”

Bachrach was born with a congenital bone deficiency that doctors believed would prevent him from walking. Despite that diagnosis, he learned to walk and swim and was able to compete in sports like baseball, bowling and gymnastics.

During his local and state athletic career earned more than 70 medals, many of which were in competition with able-bodied athletes.

He started sharing his message of positivity with students when a friend asked him to come to her daughter’s school many years ago.

“Her daughter was born missing a portion of her arm, and she wanted me to give a sensitivity training to the kids,” Bachrach said. “They loved it, and after someone came up to me and asked me ‘can you come to my school?’ I realized there was a message that could be helpful to a lot of kids.”

On Thursday at Polk, Bachrach removed his prosthetic legs to show students how he moves around — demonstrating how he found a way to do all the things he wanted to do. He drove his point home by performing a pommel horse routine to oohs and aahs from students.

“I thought it was pretty cool. It was really amazing that he tried many different sports, learning how do it and never giving up,” fifth-grader Xavier Maese said. “It makes me feel like I should try new things. I hope one day to be a football player.”

Fourth-grader Ariana Ramirez was inches away from Bachrach as he pulled his body up into a perfect handstand. She was immediately inspired.

“It is really cool that he can do all that stuff,” Ariana said. “It’s a good message for me not to give up. I can accomplish all I want to do if I have dedication like him.”

No stranger to bullying as a child, Bachrach also talked to the students about empathy and the importance of helping others.

“Take five seconds to think if it was you and someone was making fun of you … would you like it?” he said. “When you can be a friend to someone, take a chance and be their friend. Help out other people when you can.”

“Just because you are different doesn’t mean that people have to be mean to you,” McKenna said. “I thought his story was inspiring. I liked hearing about his past and what he did.”