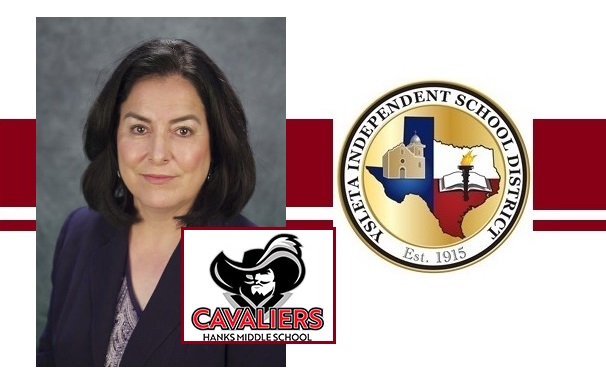 This week, officials with Ysleta ISD announced the new mascot, colors, and principal for J.M. Hanks Middle School, which is currently under construction at the former site of Indian Ridge Middle School.

Muela began her professional career as a fourth-grade teacher at Eastwood Heights Elementary School, and later served as an elementary school assistant principal and principal before taking on her current duties at Indian Ridge Middle School. She holds a bachelor’s degree in elementary education and a master’s degree in education, both from the University of Texas at El Paso.

In addition, Superintendent of Schools Dr. Xavier De La Torre announced at a Jan. 26 staff meeting that students at this new campus will be known as the J.M. Hanks Middle School Cavaliers, and the school colors will be red, cool gray, and black – consistent in theme and color with the J.M. Hanks High School Knights.

The new J.M. Hanks Middle School is an estimated $66-million state-of-the-art campus with a capacity for 1,200 students that is expected to be complete in August 2022.

Construction of this new school was made possible through the community’s support of the Ysleta ISD 2019 bond measure, which aims to right-size, renovate, and build schools in order to better serve students and remain fiscally responsible.