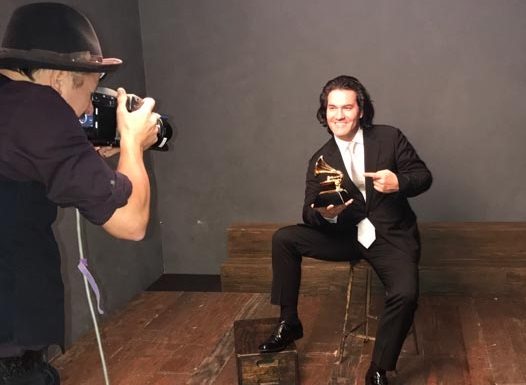 One night Zuill Bailey is performing in Alaska; a couple of days later he’s attending his first Grammy Award ceremony and walking away with the first two Grammys in his illustrious career.

The Grammy nominations were the first in Bailey’s career. During his acceptance speech for Best Classical Instrumental Solo, Bailey dedicated the win to his mother and the healing power of music.

“Tales of Hemingway” was written specifically for Bailey by acclaimed composer Michael Daugherty and was recorded live at its debut performance with the Nashville Symphony in 2015.

Hear Bailey’s performances from “Tales of Hemingway” and other selections here.

“The Nashville symphony wanted to commission a new piece of work and they had had a wonderful collaboration with Daugherty in the past,” Bailey said. “They gave him carte blanche … and he said he always wanted to write a cello concerto.”

Daugherty said in a YouTube video by the record company Naxos, which released “Tales of Hemingway,” that he knew he always wanted to write a piece about Hemingway but needed to find a connection between the musical world and the literary giant.

“When I discovered that (Ernest) Hemingway actually played the cello as a youth, I thought ‘Uh-huh, there’s the connection.’ Cello-Hemingway. So to prepare to compose this piece I retraced the steps of Hemingway,” Daugherty said in the YouTube video.

Daugherty heard the very unique sound of Bailey’s cello, which was made in 1693, and thought it sounded very masculine.

“It will become the voice,” Daugherty told Bailey of his cello, Bailey recalled.

Eight months later – and two months before its debut performance – Daugherty sent Bailey the piece to start getting ready.

“There was an excitement to it because it was a new piece by Michael Daugherty and it was using pop culture,” Bailey said. “Everything about it was brand new. Also, nobody knew how the symphony was going to respond.”

Changes were continuously made to the piece – even seconds before its debut.

Bailey’s musical abilities have taken him across the country and the globe, where he has served as an ambassador for UTEP and El Paso.

“Zuill Bailey is invested in this community, from the classroom to the concert hall, from UTEP to the Franklin Mountains,” said Felipa Solis, executive director at El Paso Pro-Musica where Bailey is artistic director. “He has been here 16 years, and has established roots, and has worked to make classical music accessible to all. He works to share his wealth of knowledge of music and his artistic prowess to all, especially students: our future. His nomination takes El Paso and UTEP to another level, in that he is sharing El Paso and UTEP with the world. This is truly monumental.”

“The Grammys represent the pinnacle of success for recording artists,” Wilson said. “Having a second Grammy winner on faculty (Lowell E. Graham, DMA, was the music director for a Grammy Award-winning CD) affords our students the opportunity to interact with musicians of the highest caliber with real-world experience. Through Zuill Bailey’s success, students can learn what it takes to be a modern, 21st century classical musician. The skills Mr. Bailey demonstrates on a regular basis include the ability to interact with a variety of audiences in a meaningful way, the ability to perform in a variety of venues, from the nation’s leading concert halls to El Paso area coffee shops, and the ability to collaborate with people and organizations for a common goal of excellence in music.”

Equally important to Bailey as winning two Grammys is being named a 2016 Musical Innovator by Musical America. He found out about that honor the same day the Grammy nominations were announced.

“He performs for thousands of students in schools every year,” the Musical America story on him states. “Acknowledging the effects of music on newborn babies, he has played in local neonatal intensive care units. Whether in school districts, low-income neighborhoods, or in prisons, Bailey is committed to bringing people together through music.”